It is a ‘ribbon settlement’ stretching for a little more than a mile from the traffic calming at the ‘west end’ to Ger Yr Afon, indicating the beginning of Gwaun Cae Gurwen.  Most of the history of the settlement relates to the mining era and its development leading to the need for housing for local workers in the pits, brick works and associated industries.

It is probable that this section of the Pontardawe Road from Llandeilo to Neath was a drover’s track for the purpose of moving cattle to the fairs and markets of Neath and beyond.  In 1741 the Highway Act meant that a road could be built through Cwmgors, GCG and Garnant, however the road was not built until 1817.  In 1805 an Act was passed covering the maintenance of the roads which lead to the setting up of the “turnpike houses”, one of which was established near to the “Old Star”, however this “turnpike House” was moved in 1856 to GCG because too many travellers were avoiding the tolls by taking the appropriate detour. 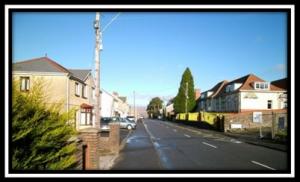