In medieval times, the Tairgwaith area lay within the Manor of Caegurwen, part of the Lordship of Gower.  One farm, Maerdy Rhys, was a particularly important place within the manor.  “Maerdy” means “Reeve’s House” and it was probably the house of a reeve or steward of the manor.  In later times it became an inn and manorial courts were held there up until the 19th century.  The parish pound, where stray sheep and cattle were penned, stood nearby.  The inn was renamed the Leigh Arms by the 20th century, and was demolished in the 1970s.

This was a very rural district until the 19th century, but coal mining was to change everything.  The first colliery was sunk here during the 1830s.  Three cottages built for the pit officials were called Tai’r Gwaith (The Houses of the Works), which later gave the village its name.  Work began on building a tramway to link the colliery with the Swansea Vale canal, via Pontardawe.  The venture failed when water flooded the pit and the tramway was never completed, although part of it can still be followed as a footpath south of Tairgwaith.

Another colliery, the Gwaun Cae Gurwen pit, opened nearby in 1837.  This mine later developed into an important group of collieries; the Old Pit (1837-1948), Maerdy Pit (1884-1948), East Pit (1910-1962) and Steer Pit (1922-1959).  During the 1880s, the Gwaun Cae Gurwen Colliery Company, which now owned the pits, revolutionised the production and marketing of its high grade anthracite coal and won several prizes at European trade exhibitions.

The village of Tairgwaith began to grow as a series of terraced streets to the east of these pits.  By the middle of the 20th century this mining village had taken shape.  The village had its own school, with a sweet shop opposite, a Post Office, Co-operative Stores, a grocers and a fish & chip shop. Another inn, The Bakers, had opened and St David’s Church was built to look after the spiritual needs of the people. The South Wales Miners Federation also built a Miners Hall on New Road, towards Gwaun Cae Gurwen.

Opencast mining has replaced the deep pits, and many of the traces of the old collieries have disappeared.  Although coal is still being produced here, Tairgwaith is no longer mining village. 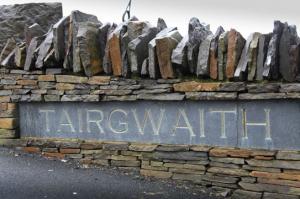